Humor is generally regarded as an important and valuable tool for sustaining engagement with students (in moderation, of course). But what is really going on in the brain when it comes to humor?

In an article in New Scientist magazine, Daniel Elkan writes,

Yet humour is a far more complex process than primeval pleasures like sex or food. In addition to the two core processes of getting the joke and feeling good about it, jokes also activate regions of the frontal and cingulate cortex, which are linked with association formation, learning and decision-making. The team (led by Dean Mobbs of Stanford) also found heightened activity in the anterior cingulate cortex and the frontoinsular cortex – regions that are only present in humans and, in a less developed form, great apes. Indeed, the fact that these regions are involved suggests that humour is an advanced ability which may have only evolved in early humans, says Watson, who conducted the research.

He goes on to write,

More than anything, the recent research confirms the fact that humour, an oft-neglected trait when considering our cognitive skills, requires a tremendous amount of brain power. “Getting a joke would seem – on the surface – to be a very trivial, intuitive process. But brain imaging is showing us that there is more going on than we might think,” says (Andrea) Samson (of the University of Fribourg in Switzerland).

Below is the accompanying graphic for that article, showing the parts of the brain activated when under the influence of humor: 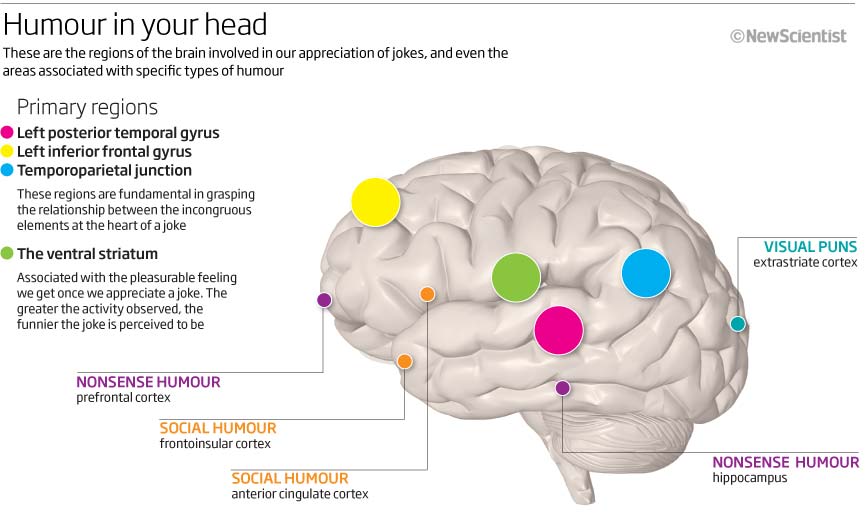 (After clicking "subscribe," check your email for confirmation. Thank you!)